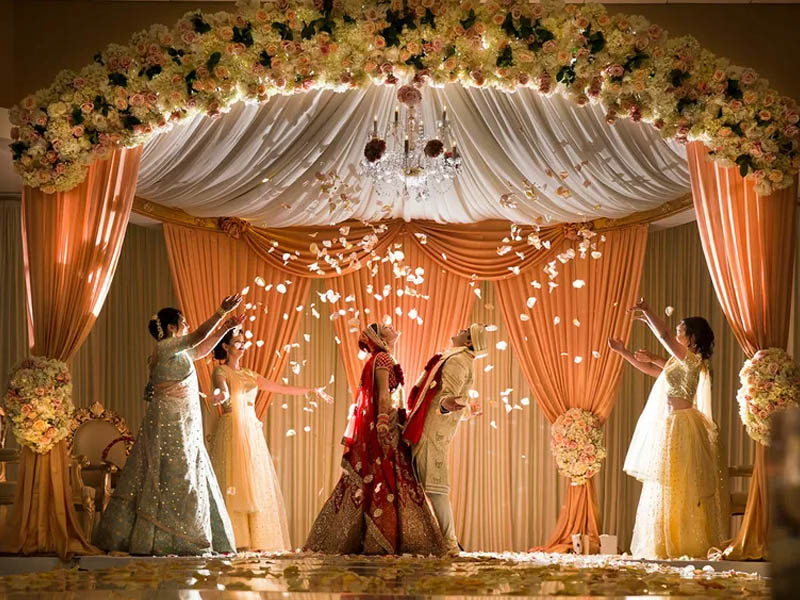 The first day is called “muhurta”. Women clean and decorate the pandala. Guests decorate their foreheads with akshatas and sandalwood, smear their heads with sesame oil and wash themselves. The priest prays to all the deities.

The newlyweds sit with their parents in the center of the pandala. The bride’s father lists the names of the ancestors. The women then bring in a clay brazier. The priest places various foods with which he pays homage to the nine planets. On the east side of the brazier, the priest spreads stalks of darbha and akshatas in honor of the god Brahma and the other gods. A new clay brazier with a yellow thread is brought in and the sacred fire is placed on it.

It’s time for the muhurta custom. The groom reads mantras and pretends to go on a pilgrimage. He leaves the house, where he is met by the bride’s father, offers his daughter and brings him again. The “cancan” custom is performed – with pieces of turmeric, saffron, rice and coconut prayers are offered to the gods.

The newlyweds sit facing each other, stretching a piece of silk in front of them. The bride is tied with the “tali” ornament, which is worn by all married women. Tally is strung on a string, dyed with saffron water and consists of 108 thin threads. Many lamps are lit, songs are sung and the boy ties the bride’s waistcoat. A fire is brought in, a stone smeared with sandalwood is placed near it, and the newlyweds walk around it.

Only after all the rituals are over, the newlyweds are given food specially prepared for them. Oil is poured on their fingers and after licking it, they are given to eat from the same leaf. Never again does a woman have the right to eat from her husband’s dish. After eating, the newlyweds go out with the guests to the sound of music. The priest shows them a small star, they bow and they all go home.

On the second day, the most important ceremony is the placement of “basina” jewelry – a gold leaf with wreaths of flowers. This is done to protect the newlyweds from lessons and evil forces.

On the third day, the woman and the man perform the Homa sacrifice, the man making it with boiled rice and the woman with lightly baked rice.

On the fourth day, the nalangu ceremony takes place, during which the newlyweds rub each other’s feet with saffron powder.

On the fifth day, the deities are released and gifts are given, with the priest leading the ceremony and the women singing singing receiving the most gifts. In the evening, the newlyweds, full of flowers, and all the guests go on a solemn procession.