Rituals at the Birth of a Child 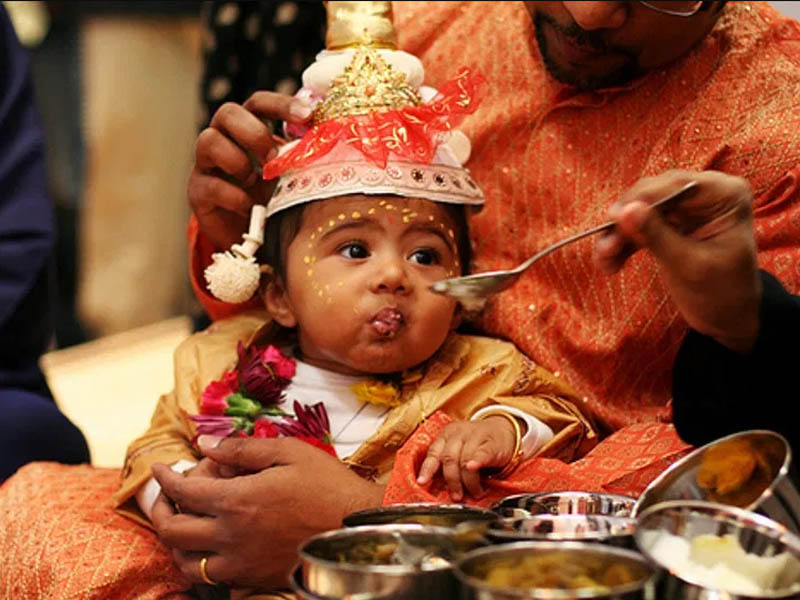 After the birth of a child for ten days the occupants of the home should not meet with anyone because they are dirty. On the eleventh day, Brahman Purohita comes to the house. The mother with the baby stands on something like a platform made of earth, erected in the middle of the house. The priest pours a little water into the hands of the mother and father, who drink part of it and pour the rest on their heads. The brahmana then sprays the inhabitants of the house and the house with water, and pours the rest into the well. The mother lives in solitude until the end of the first month and does not meet anyone.

The child is named on the twelfth day after birth. The father invites relatives and friends. Guests perform cleansing washes together. The father with the child in his arms sits on the pile ring. A copper bowl with rice is placed next to it. With the index finger of his right hand, he writes on the rice the day, date, constellation under which the child was born and the chosen name, and then names it aloud three times. The mother is not present at the ceremony.

When she is six months old, the child stops breastfeeding. Then, for the first time, it eats another food. Relatives and friends are being invited. The parents and the child stand in the center of a specially raised pandal. The priest performs sacrificial ceremonies. Women sing songs about the well-being of the child. Married women bring in a new copper vessel donated by the child’s uncle and a string made of cotton fiber. They pour into the dish “paramanna” – a mixture of rice, sugar and other ingredients. The women place the vessel before the domestic deities and turn to him and the other deities with requests for the health, strength and longevity of the child.

There is a special custom in which the newborn’s hair is shaved after his first year. It is believed, especially for girls, that baby hair is frail and must be destroyed to grow new ones. Long hair for the Indian woman is a sign of femininity and self-confidence.